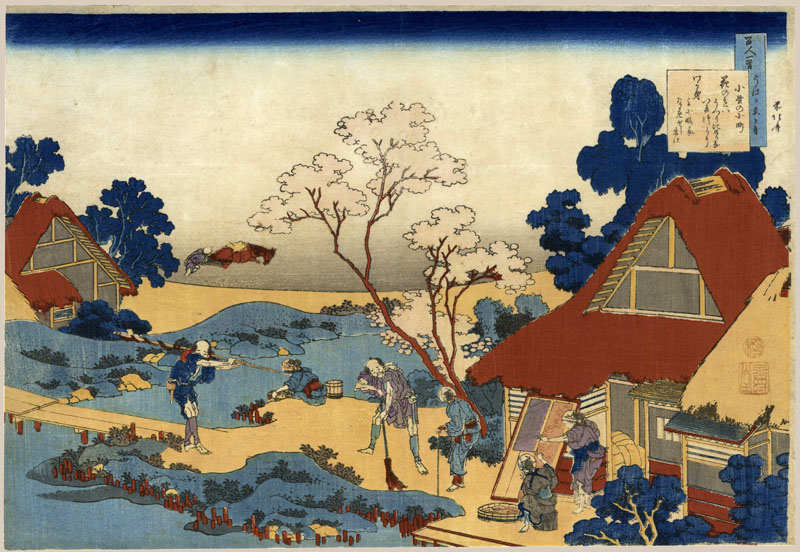 Notes: During his peak period of woodblock print publication in the 1830s, Hokusai produced two series of single-sheet prints dedicated to poets, True Mirrors of Poetry, a vertical series which included both Japanese and Chinese poets, and One Hundred Poems Explained by the Nurse, a horizontal series in which each sheet illustrated one of the poems in the Ogura Hyakunin Isshu. Together with the slightly earlier series, Thirty-six Views of Mount Fuji, the One Hundred Poems series is considered to be the pinnacle of Hokusai’s work as a woodblock print designer.

The One Hundred Poems series, which would have been Hokusai’s most ambitious series of single-sheet prints, was interrupted by the Tenpö famine of the mid-1830s, and never completed. Only twenty-eight prints (twenty-seven in full color and one in only keyblock impression) are known to have survived.

This Item Has Been Sold

Trained as an engraver, Hokusai also learned to carve woodblocks for prints and studied under Shunsho. Early works included surimonos and illustrated volumes of verse. His first "Manga" volume appeared in 1814. After 1820, his great landscapes were produced, including "Thirty-Six Views of Mt. Fuji". Though living an unsettled life with many changes of residence and two marriages, Hokusai was still able to produce a huge number of prints, sketches and paintings -- perhaps 30,000 in all. Characterized as inventive, daring and dexterious, he is regarded as one of the greatest draftsmen of all time.