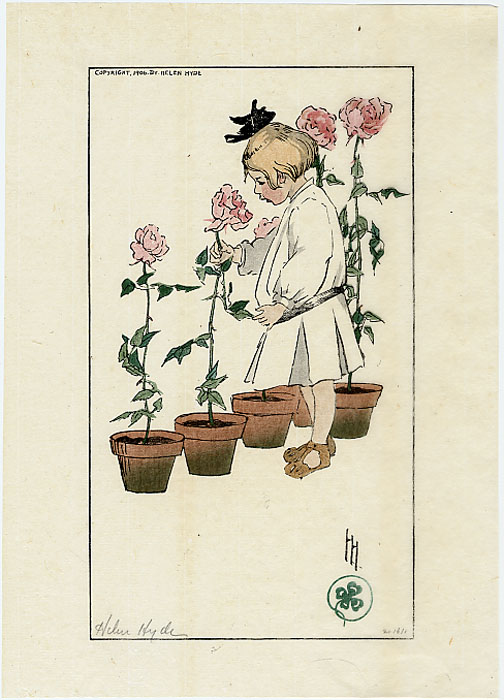 The actual carving was done in Matsumoto's own workshop, but Murata came to the studio daily during the winter months to print under Helen Hyde's close supervision. He printed on thin transparent paper that was not usual for woodblock prints. Hyde usually signed the prints in pencil and also sealed them with her initials and/or a cherry blossom seal or a seal representing her Japanese name "Hatono" (Pigeon of the field). - Point of Contact; pg. 27

Born in Lima, New York, Helen Hyde moved to San Francisco with her family in 1870 where her wealthy father had built a business based on the Gold Rush. At age 12, she began studying art with Ferdinand Richart in Oakland. In 1882 her father died and her mother and sisters relocated to the home of her Aunt, Augusta Bixler. In 1886 she graduated from Wellesley School for Girls and entered the California School of Design.

Between 1888-1894 she studied in New York City, Berlin and Paris where she met Felix Regamey, a Japonist who greatly influenced her development. In 1894 Hyde returned in San Francisco and in 1895 she bought a printing press and experimented with etching.

In 1896, Chinatown became a source of subjects for her early etchings, which she continued to sell in America. In 1899, Hyde traveled to Japan and by 1900 began producing colored etchings and woodcuts in Tokyo. There she met Ernest Fenollosa and Emil Orlik. In 1901 she returned to San Francisco and in 1902 visited dealers in New York and Boston, returning to Tokyo at the end of the year. Between 1903·1913 she traveled widely from her base in Tokyo, visiting China, India and Mexico, before returning permanently to the United States in 1914. Hyde exhibited prints at the Panama-Pacific International Exhibition in 1915 where she won the Bronze Medal. Moving to Chicago, she had a solo show at the Chicago Art Institute in 1916. In 1919 Hyde visited her sister Mabel in Pasadena, California, where she died of cancer. A memorial exhibition of her works was held at the Art Institute of Chicago the following year.

As one of the first Western artists to study Japanese print making in Japan, Helen Hyde influenced many other artists to visit and study there. Her works continue to be popular with collectors of American color prints of the early twentieth century.