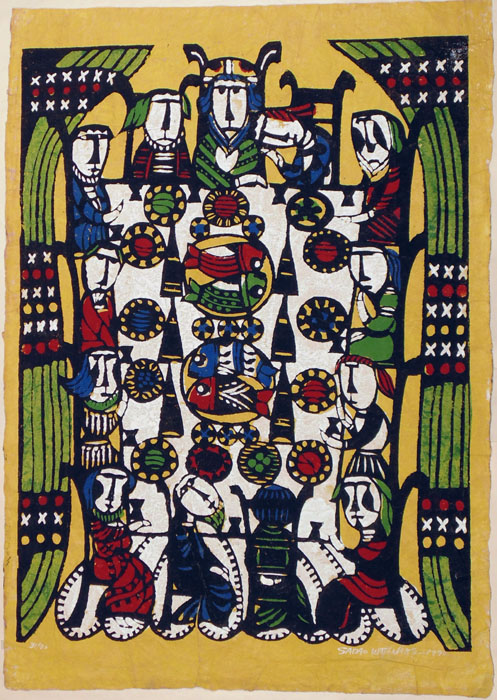 Notes: Numbered, signed & dated in white ink by the artist. A large, bold image printed on hand-made paper. One of the artists most recognizable designs.

*Due to the size, this item will be shipped gently rolled and protected in a strong tube.

Born in Tokyo in 1913, Sadao Watanabe began by specializing in the art of "Katazome" (stencil printing). He studied under Soetsu Yanagi and Keisuke Serizawa. In 1947 he won the first prize from the Japan Folk Art Museum and the Kokugokai Prize in 1948. A one-man show was held at the Portland Art Museum in 1962 and his works were exhibited in the Modern Print Show at the 1972 Winter Olympics, Sapporo, Japan. Watanabe taught printmaking in Oregon and Minnesota and in 1976 visited America again at the invitation of the Lutheran Church. He had a one man show at the Grace Cathedral, San Francisco in 1977. In 1981, Watanabe received an honorary Doctor of Fine Arts degree from Linfield College, Oregon.

Sadao Watanabe works are in numerous collections including the New York Museum of Modern Art, Art Institute of Chicago, Honolulu Academy of Arts and the Vatican Museum of Modern Religious Art.